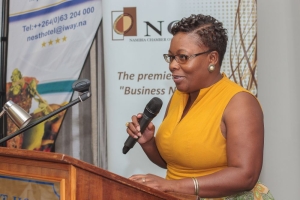 “Give a man fish and you feed him for a day, but teach a man to fish and you feed him for a lifetime?” Lüderitz mayor Suzan Ndjaleka used this famous Chinese proverb to urge women to make use of the inspiration provided by speakers during the Mayoral Businesswoman Dinner at Lüderitz on Thursday evening. The annual event precedes the Lüderitz Crayfish Festival and aims to enthuse women to initiate and elevate their own entrepreneurial efforts.

The speakers were Namibian businesswomen Twapewa Kadhikwa, Cynthea Martin-Haihambo and civil society practitioner Eva Lisa Nailenge. Ndjaleka said that Lüderitz with its rich history and sea environment was a business jewel ready to be explored. She implored on the guests, mostly from the corporate and decision-making structures of the town, to identify the opportunities that exist before losing it to people from outside more willing to explore the possibilities. Both Kadhikwa, owner of the Xwama Cultural Village and Traditional Restaurant, and Martin-Haihambo, founder of Women of Destiny empowerment group, opined that a lax attitude resulted in lost chances. Kadhikwa said that foreign nationals such as the Chinese and Nigerians in Namibia were often quicker to pursue business opportunities than the locals. 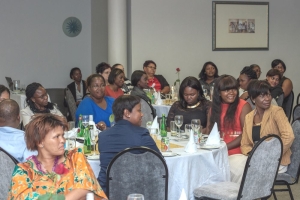 “Namibians limit themselves and this has to end my sisters,” Martin-Haihambo concurred. All speakers spoke in favour of a ‘sisterhood of support’. “We are nurturers by nature and more tolerant and open to new prospects. We are determined to further the mandate of Government to empower women in all sectors,” Ndjaleka said.

The speakers advised the women not to regard the lack of money as an obstacle. They called for hard work and the pursuit of dreams, and said that an optimistic mind stimulate positive rewards. “A financing institution will not turn down a viable business idea,” Ndjaleka said. The theme for the 2015 Crayfish Festival is, ‘We love the sea’. The festival ends on Monday.