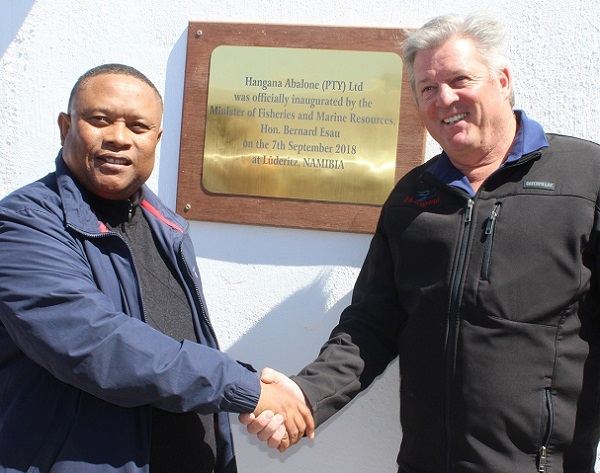 The O&L subsidiary, Hangana Seafood, last week Friday inaugurated the first phase of its N$60 million abalone (perlemoen) farming project in Lüderitz, bringing to Namibia a potentially lucrative industry with a vast potential for growth once the nuts and bolts of this specialist enterprise has been determined.

Hangana Seafood Managing Director, Herman Theron, said their new venture will be a significant employer once the project runs at full capacity. Hangana has already spent some N$40 million in the first phase, establishing a farm that can produce roughly 35 metric tonnes of abelone per year. As the facility is expanded, production of 100 tonnes per year is targetted, in the process creating about 300 new jobs.

The Lüderitz abelone farm has existed for several years but the enterprise required further capitalisation to unlock its enormous potential. Abelone is a highly popular and expensive seafood with a huge demand in Asia. Demand for this marine commodity is so high that prices have escalated into the stratosphere. For this reason, it is favourite item with smugglers but it has also lead to the overexploitation of wild population’s along the South African coastline.

Lüderitz with its clear, cold, well-oxyginated water is an ideal locality to farm abelone.

Namibia is rich in resources, with unlimited potential in the Atlantic ocean. As a leader in the local fishing sector, Hangana Seafood is proud of this new venture which will set Namibia apart as a significant producer of such a delicacy, Theron commented.

Minister of Fisheries and Marine Resources, Hon Bernard Esau said this investment demonstrates that there are lucrative investment opportunities at the Namibian coast, other than just fishing rights and quotas.

“To the O&L Group and Hangana Seafood, I wish to say that you are demonstrating, through concrete actions, that you are serious about creating jobs, investing in fisheries, and giving meaning to the Government’s call to develop this country,” said Esau.

He continued ”Abalone farming is ecologically and economically viable in Namibia, and it is a lucrative product whose market demand far exceeds global supply. Abalone production here in Lüderitz, and indeed all along the coast of Namibia is sustainable as it only needs kelp, a type of seaweed, to feed it. I understand that abalone is to the sea what rhinos are to land. With prices exceeding N$500 per abalone, poaching of this marine species in the wild is a global problem that all governments are closely cooperating on.”

Ohlthaver & List Executive Chairman, Sven Thieme said “The Hangana Abalone Farm was identified as a huge opportunity to invest in the Karas Region by creating employment for the people and community, and in so doing uplifting the lives of our fellow Namibians, in particular the community of Lüderitz.”