Things to Do and See

Luderitz  has enough going on to keep a busy adventurer happy for a good few days, from spectacular photographic opportunities, water activities, colourful festivals, quaint architecture to the richness of this southern Namibian port’s history. 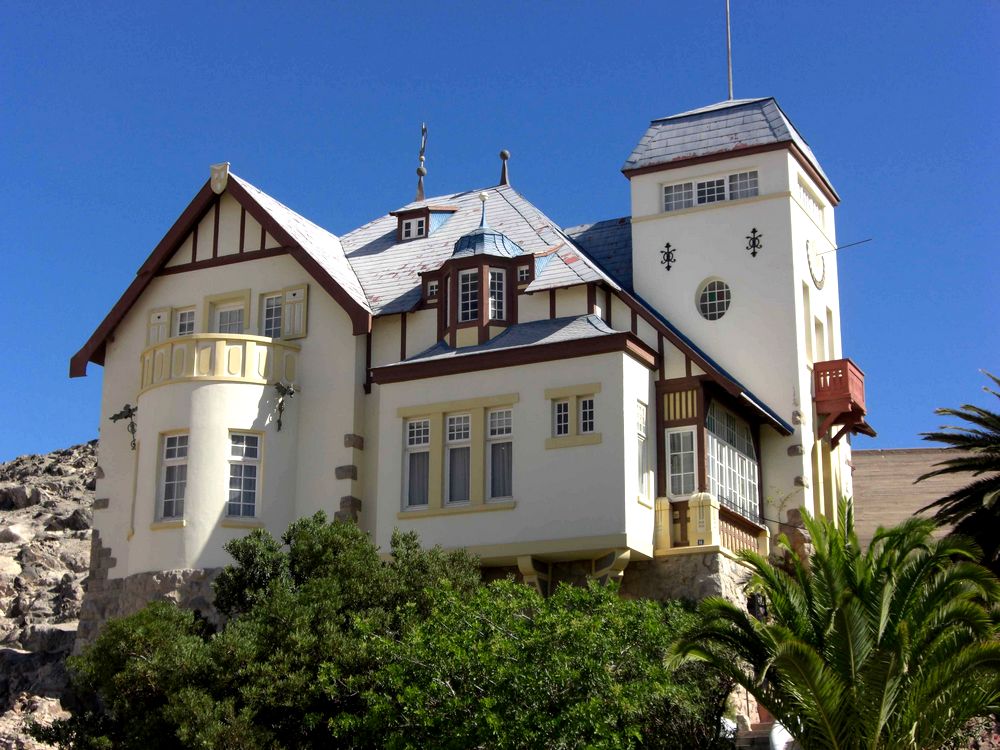 The town also has several historical sites, which are worth visiting. There is a wealth of information on the town’s history and you can find this information at any tourist centre or hotel in Luderitz. A number of memorials can be found including one dedicated to the first pioneer, Heinrich Vogelsang; one to the founder of Luderitz, Adolph Luderitz and one to Captain Cornelius Fredericks, a Bethanie Nama leader.

Colourful buildings built during the time of German occupation line the streets, and businesses more than a hundred years old can be found on some of the streets. Some of these buildings are of historical importance including the Goerke Haus, and the Woerman Linie building.

The sheer scale of Goerke Haus (a national monument) and the way it blends into the rockface is very impressive. Originally the home of Lieutenant Hans Goerke, and designed by architect Otto Ertl and constructed in 1910 on Diamond Hill, it was one of the town’s most extravagant properties. The house has undergone an admirable renovation job and is certainly worth a look. This museum contains information on the town’s history, including displays on natural history, local indigenous groups and the diamond-mining industry. Phone to arrange a visit outside standard opening hours. 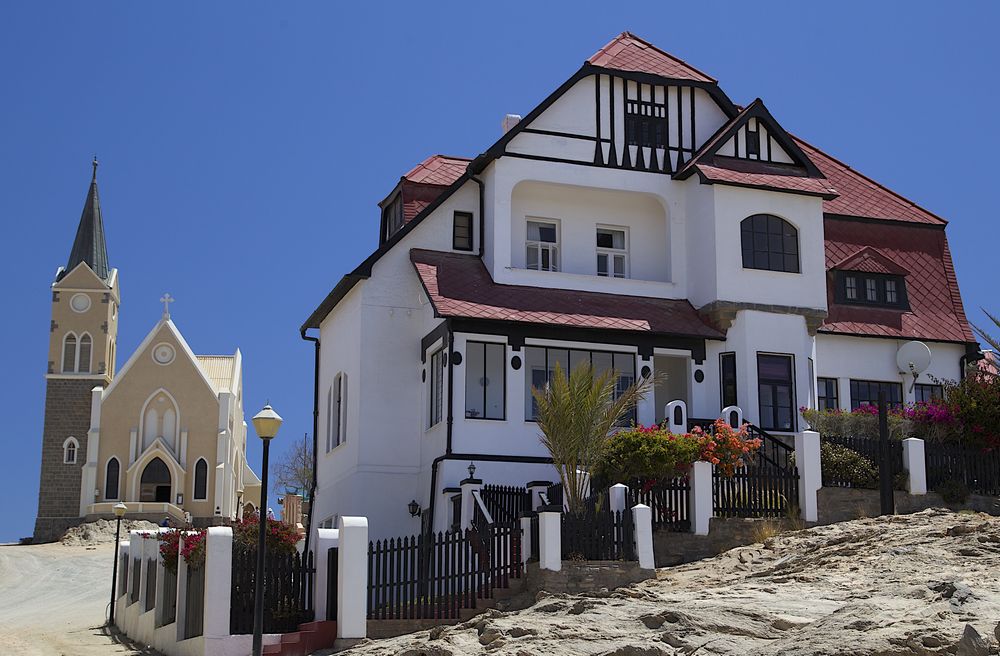 The prominent Felsen Kirche, a Evangelical Lutheran church dominates Lüderitz from high on Diamond Hill. It was designed by Albert Bause, who implemented the Victorian influences he’d seen in the Cape. With assistance from private donors in Germany, construction of the church began in late 1911 and was completed the following year.

The brilliant stained-glass panel situated over the altar was donated by Kaiser Wilhelm II, while the Bible was a gift from his wife. An ideal vantage point for photographers for the views over the bay and the town. 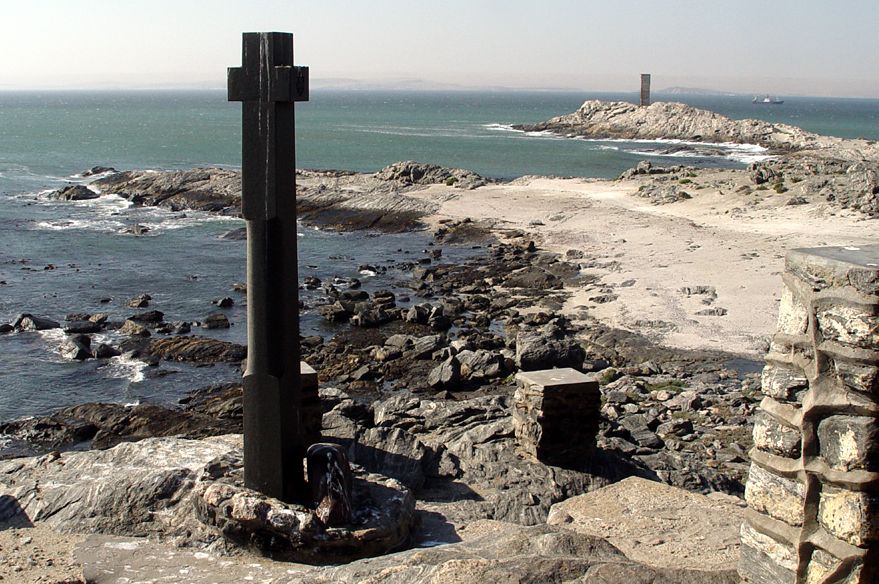 A short drive outside of town and one can find Dias Cross, which is a must see if you are in Luderitz. The site marks the location of where Bartholomew Dias landed in Namibia.

Tourists can now visit this spot and enjoy the delicious cake and coffee on sale at the small café run nearby the site. 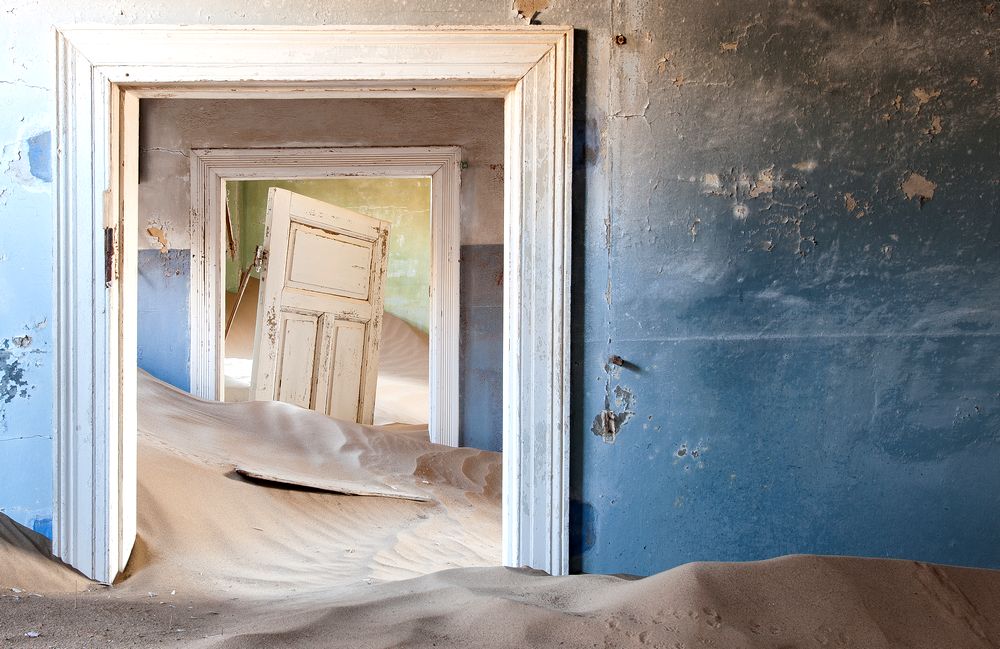 Kolmanskop (Afrikaans for Coleman’s hill, German: Kolmannskuppe) is a ghost town in the Namib desert, 10km inland from the port town of Lüderitz. It was named after a transport driver named Johnny Coleman who, during a sand storm, abandoned his ox wagon on a small incline opposite the settlement. Once a small but very rich mining village, it is now a popular tourist destination.

With the discovery of diamonds in this area in 1908 German miners began a settlement, and soon after the German government declared a large area as a “Sperrgebiet”. Driven by the enormous wealth of the first diamond miners, the residents built the village in the architectural style of a German town, with amenities and institutions including a hospital, ballroom, power station, school, skittle-alley, theatre and sport-hall, casino, ice factory and the first x-ray-station in the southern hemisphere, as well as the first tram in Africa. It had a railway link to Lüderitz. 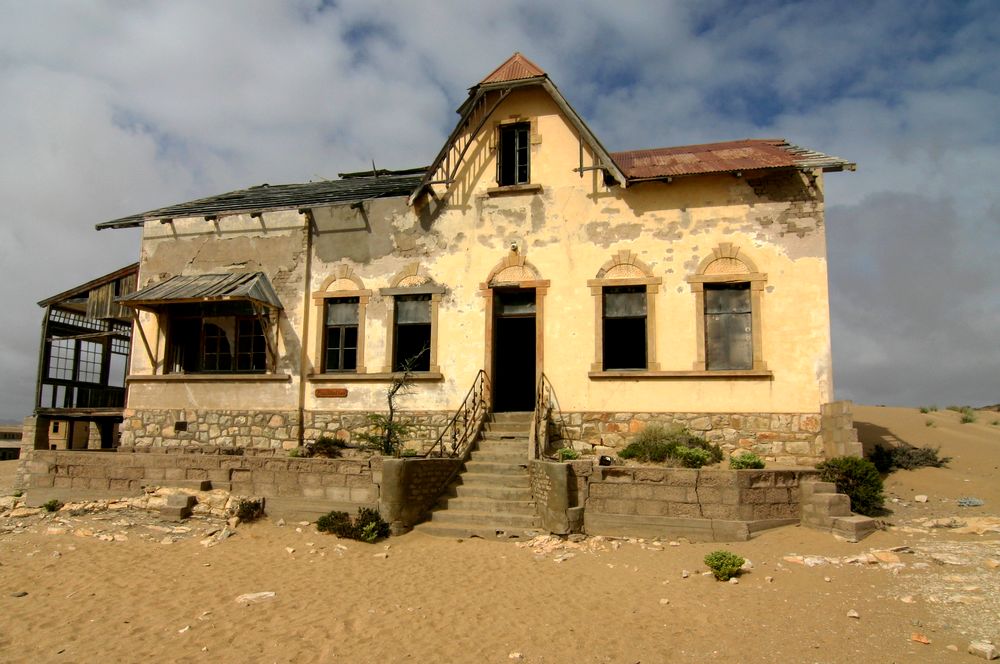 The town declined after World War I when the diamond-field slowly exhausted and was ultimately abandoned in 1954. The geological forces of the desert mean that tourists now walk through houses knee-deep in sand. Kolmanskop is popular with photographers for its settings of the desert sands’ reclaiming this once-thriving town.

Due to its location within the restricted area (Sperrgebiet) of the Namib desert, tourists need a permit to enter the town. Permits can be bought at the gate into the town and tours run daily at 9:30am and 11am local time(GMT+2), 10am on a Sunday. 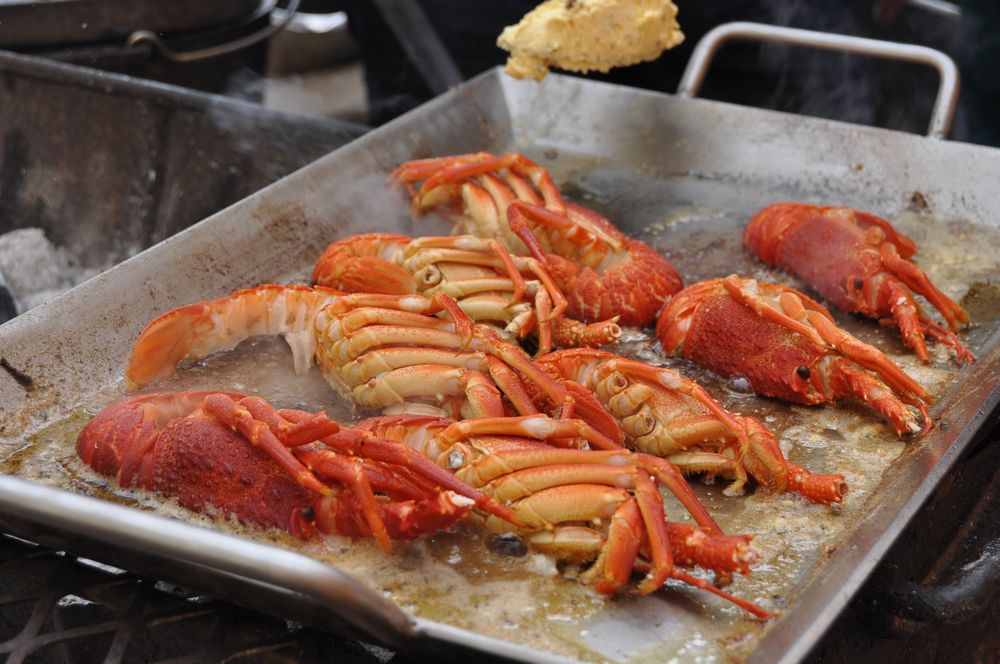 The annual colourful Lüderitz Crayfish Festival takes place around Easter and attracts thousands of visitors to Lüderitz. The festival is a community led project and is a joyous celebration of the fabulous rich local marine life, especially the delicious local rock lobster, aka Crayfish or Kreef (Afrikaans).
An important objective of the festival is to boost local enterprise and to attract valuable inward investment. The festival hosts international and local exhibitors with their offerings of innovative products and services, hand-made crafts and wares. To add to the party atmosphere, a smorgasbord of entertainment, activities and delicious seafood makes the festival an event not to be missed. Early accommodation bookings is always advisable to avoid disappointment. 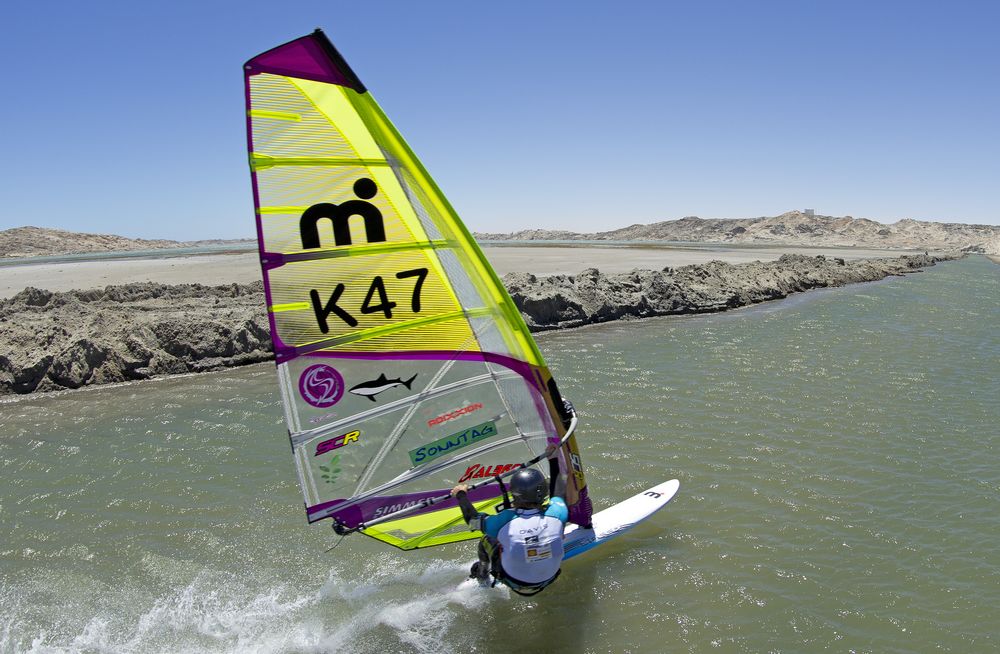 Since 2007, the Lüderitz Second Lagoon (7.5 kms from town) and en-route to Diaz Point, has become the world’s top speed sailing spot. The Lüderitz Speed Challenge is a six week-long event and attracts the world’s leading kite and windsurfing champions. To date, this thrilling and extreme speed sailing event has produced 95 national and 14 World Records.

At the 2015 event, two new world windsurf records were set; Antoine Albeau (FRA) with 53.27kts/98.55kph & Karin Jaggi (SUI) with 46.31kts/85.67kph. The event has been featured on leading international television stations as well as on YouTube and Facebook. The Lüderitz Speed Challenge is the only sporting event in Namibia which appears in various GUINNESS WORLD RECORDS BOOKS. The 6 week event normally takes place between October and November; www.luderitz-speed.com
In 1984, adventurer, explorer and sailor Amyr Klink, successfully rowed to Brazil from Lüderitz – this massive physical and mental undertaking took him 101 days.

The beaches near Luderitz are also quite spectacular. White sands and shallow waters make these beaches perfect for picnicking and sunbathing. The fact that there are so few people in this part of the world only helps you appreciate the isolated beauty of the locations around Luderitz.

The coastline in the area is recognised by Bird Life and other global conservation groups as one of the Important Bird Areas (IBAs) for important coastal seabird breeding.

Several species of cetaceans, most notably Haviside’s dolphins, can be seen close to the shore while larger whales such as southern right, humpback, minke, fin, pygmy right, are less common but gradually increasing in numbers. A number of tour operators offer dolphin excursions.

Wild Horses of the Namib 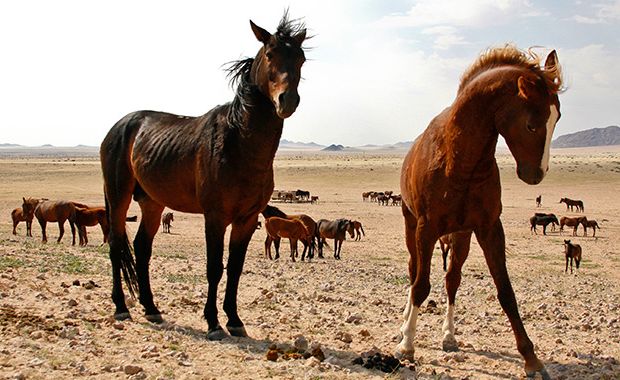 The Wild Horses of the Namib hold a powerful fascination for visitors who are often surprised to find horses roaming the arid desert areas on their way to Luderitz. Their forebears, once in the service of mankind, gained their freedom a century ago to live their lives in the vastness of the Namib Desert away from human civilisation.  Decades of intensive research has resulted in a detailed understanding of the horses and their environment. The research conclusively substantiated that the horses are a harmonious part of the desert ecosystem.